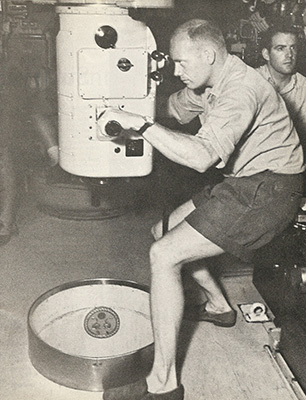 All modern submarines have a wide array of electronics at their command, including the ability to transmit images around the planet in real time. The days of the boat's darkroom being set up in the JR's Washplace are long gone.

On occasion, a submarine will transmit periscope information to shore authorities for analysis. On rare occasions, these images are released to the general public, usually for publicity purposes. By special arrangement, the link below will connect LIVE with the Tactical Television Console (TTVC) on a Canadian submarine. The vast majority of the time the image will be solid black - meaning either the TTVC link has not been activated for the general public, or else it has been activated but the periscope is fully lowered in the periscope well at the time. On such occasions, check back later.

Should the TTVC link be active, the following conditions will be in effect:

1. Any and all images transmitted through the Live TTVC Feed are copyright Her Majesty The Queen in Right of Canada and may not be used for anything other than the stated purpose without written permission from the Department of National Defence.

2. By connecting to Live TTVC Feed, the user accepts all liability.

3. For security reasons, any information related to submarine position, course, depth and speed will not be available on the network.